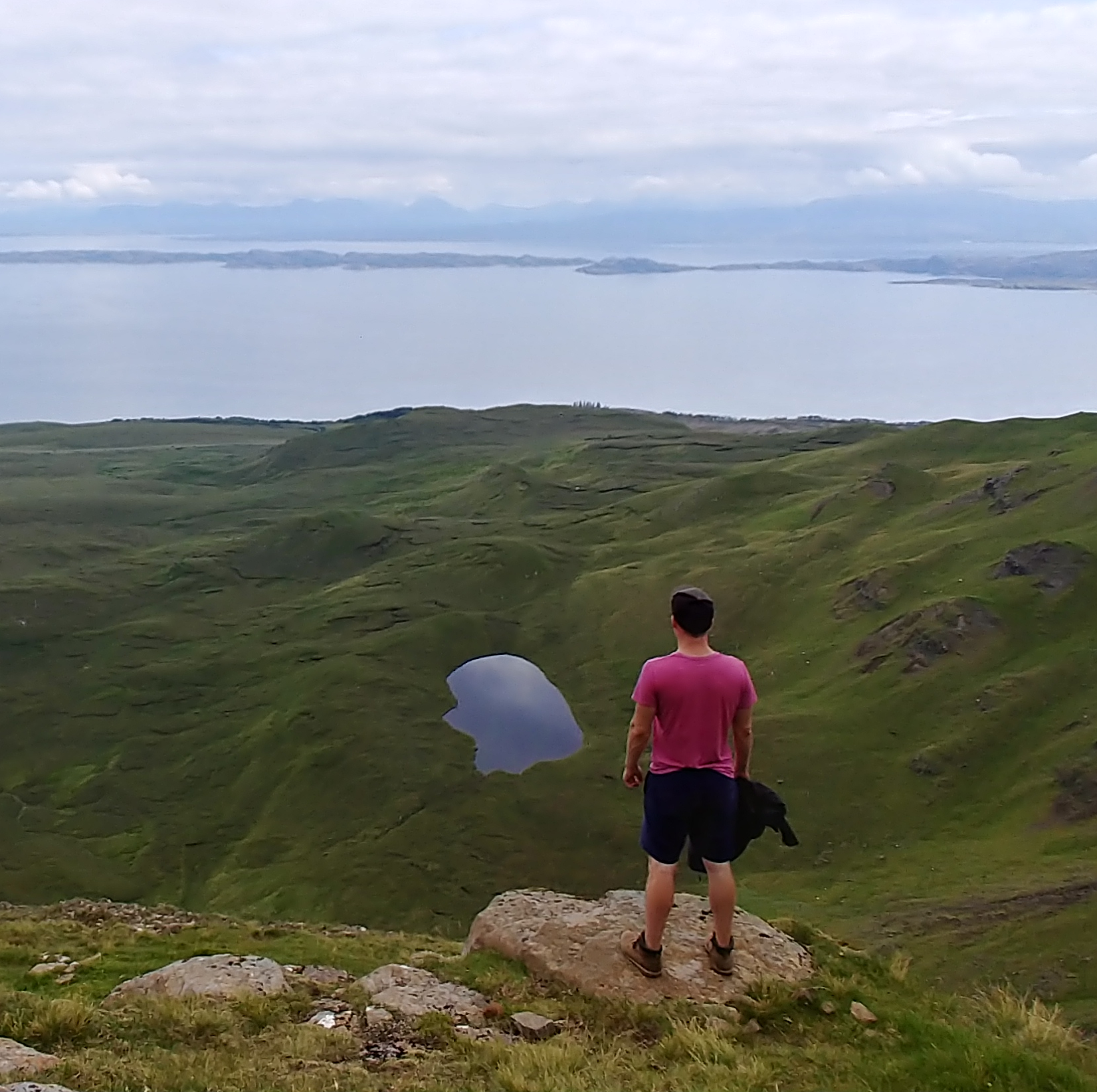 Kerberos Delegation: A Wrap Up

There many good posts about Kerberos Delegation, explaining the backgrounds, underlying concepts and terminology of it. This post is is a wrap-up of Kerberos Delegation and unlike other posts it will not dig into where it came from and lay out surrounding concepts.
Most important: This wrap-up assume the reader is aware of the environment that Kerberos Delegation takes place in.
If you need a fresh-up on this read through Kerberos Authentication: A Wrap Up

Delegation allows a server application to impersonate a client when the server connects to other network resources.
In other words: Delegation specifies the client’s action to authorize a server in order to allow this server to impersonate itself (the client).

There are 3 Types of Kerberos Delegation:

Unconstrained Delegation allows a server to impersonate a client against any service the server wishes to. The client gives the server a wildcard allowance for impersonation.
Server and client are conceptual terms to stress the idea of delegation, read this as the server being a User account and the client being some other user account.

The user properties for a user that is allowed for unconstrained delegation is shown below: 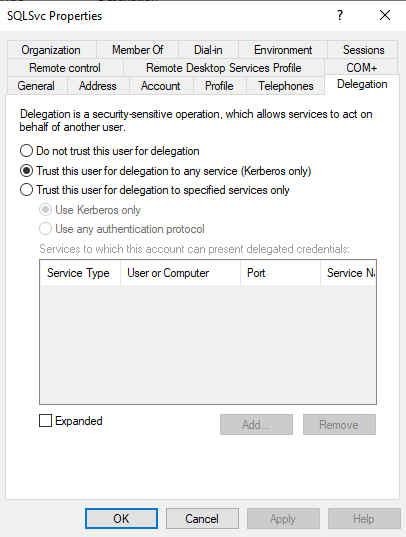 Who is allowed to set the attribute ‘TRUSTED_FOR_DELEGATION’ for other users?
All Principals that hold the SeEnableDelegationPrivilege privilege.
→ On domain controllers, this right is assigned to the Administrators group by default.

The permission to set the TRUSTED_FOR_DELEGATION attribute for other users is controlled by a user privilege.
User privileges are access rights granted to principals on a local computer (not domain wide access rights). Each system has a database to store which principal has which privileges.
A list of Privileges (user rights) can be found here: https://docs.microsoft.com/en-us/windows/security/threat-protection/security-policy-settings/user-rights-assignment

The most efficient way to spread privileges rights within a domain is by the use of Group Policy Objects (GPO) (could also be set locally using secpol.msc)

How can it be abused by an attacker?

First step is to identify if any principal has the TRUSTED_FOR_DELEGATION UserAccountControl attribute set (see ADSISearcher snippet above), let’ say this is UserA.

If there is a user set with TRUSTED_FOR_DELEGATION (UserA), an attacker can steal another user’s TGT - let’s call that user UserB - if:

For 1. @tifkin_’s amazing SpoolSample.exe (also known for being the exploit for “The PrinterBug”) can be used to trick an arbitrary ComputerAccount (including the DC-Computer account) to authenticate against a chosen target machine:

For 2. Easiest way to extract a TGT is by having local admin access to the targeted Computer, and then using either

The extracted TGT of the targeted principal (UserB) can then in turn be used to connect to arbitrary other services on behalf of the victim, UserB.

An attack chain could look as follows:
Assume you found found a computer account (ComputerA$) is set with the TRUSTED_FOR_DELEGATION attribute:

Constrained Delegation allows a server to impersonate a client against defined, specified service(s). Server and client are conceptual terms to stress the idea of delegation, read this as the server being a User account and the client being some other user account.

Let’s say a user (UserA) connects to a service (let’s call it ServiceA) using his service ticket for ServiceA.
Now ServiceA needs to connect to another service (let’s call that ServiceB) to do it’s task, but it needs the permissions of UserA to do that.
In short: ServiceA wants to impersonate UserA and delegates his/her access permissions to ServiceB.

This is where Constrained Delegation comes into play. Instead of allowing ServiceA to completely impersonating the user (against all services in the domain), ServiceA should only be allowed to impersonate UserA against ServiceB.

The way this is done is as follows: 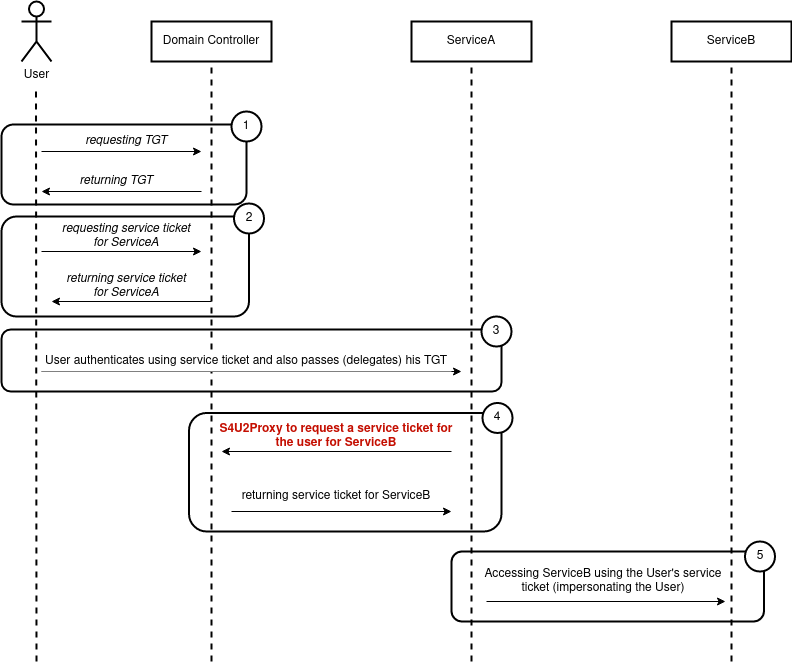 (Note in red the use of S4U2Proxy instead of using the user’s TGT, which would require Unconstrained Delegation)

In this case ServiceA makes use of the S4U2Proxy service in order to request a service for ServiceB on behalf of UserA.
The S4U2Proxy services requires that the caller (ServiceA) presents a valid service ticket for the user that should be impersonated (UserA).
This is meant to ensure that the user exists and has really connected to ServiceA (otherwise ServiceA would not have the user’s service ticket). There might occur cases where ServiceA can’t present a service ticket for the User (because UserA hadn’t connected via Kerberos), for those cases the Protocol Transition with the S4U2Self service has been created (we’ll get to this in a moment further down below).

Note that the service ticket provided in the S4U2Proxy request must have the FORWARDABLE flag set.
The FORWARDABLE flag is never set for accounts that are configured as “sensitive for delegation” (the USER_NOT_DELEGATED attribute is set to true) or for members of the “Protected Users” group.

In order for this to work ServiceA must be authorized for Constrained Delegation (more on this below) and must be specified with a defined set of user accounts that can impersonate (meaning where it can delegate a user authentication to).

An Example account configuration could look like this:
In the below image ServiceA would be the user SQLSvc and ServiceB would be EXCHANGE01.
Note here that ServiceA can not impersonate a user against all services of EXCHANGE01 (ServiceB), but only against the DCOM service.
»Take away»: Constrained Delegation is different to Unconstrained Delegation by only allowing impersonation for specified services. 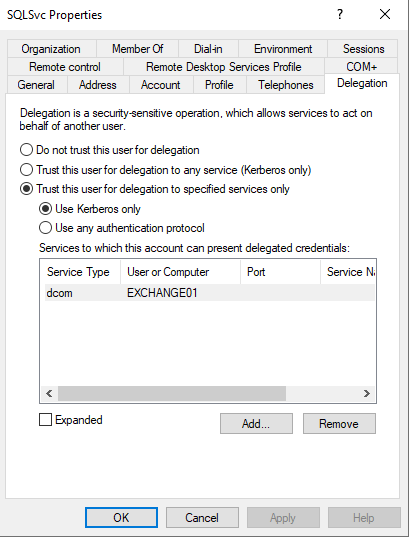 Who is Authorized For Constrained Delegation?
All Principals that have the ms-DS-Allowed-To-Delegate-To object attribute.
→ Per default no principal has this attribute

The following Powershell snippet can be used to find all user’s that have the ‘ms-DS-Allowed-To-Delegate-To’ object attribute:

Who is allowed to grant set the ms-DS-Allowed-To-Delegate-To Attribtue for other users?
All principals that hold the SeEnableDelegationPrivilege privilege.
→ On domain controllers, this right is assigned to the Administrators group by default.

In the “usual” Constrained Delegation process the S4U2Proxy service is required to obtain a service ticket for the user that a service wishes to impersonate. This is meant to ensure that this user exists and has really authenticated to the service that now tries to impersonate him/her.

In the cases where UserA does not authenticate to ServiceA via Kerberos, ServiceA can use the S4U2Self service to create a servuce ticket for UserA, which it then in turn can use to run S4U2Proxy as usual.
→ This means ServiceA can request a service ticket for/to itself for any arbitrary user.

As this is sensitive operation Microsoft created an additional UserAccountControl Attribute ‘TRUSTED_TO_AUTH_FOR_DELEGATION’.
Only principals that hold this UserAccountControl attribute can request service ticket to/for itself for any user from the KDC.

Assume UserA connected to ServiceA via NTLM, the authentication flow then looks like the following (making use of S4U2Self) 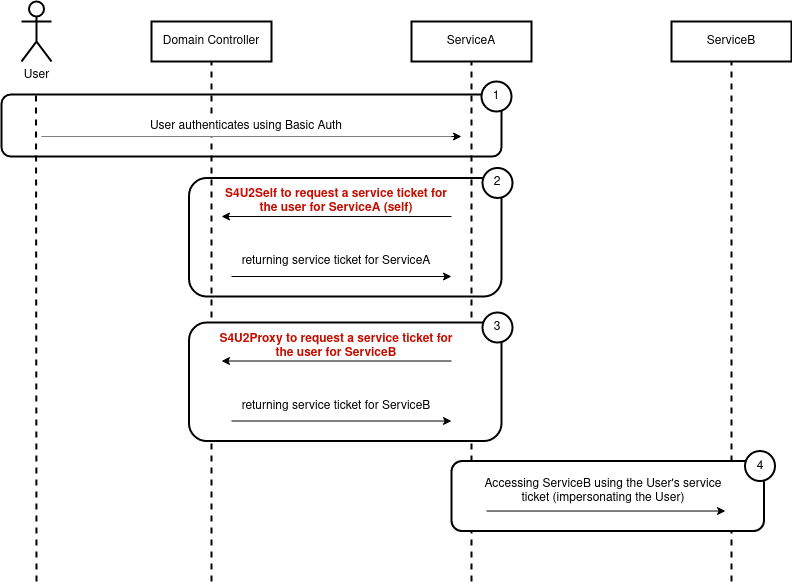 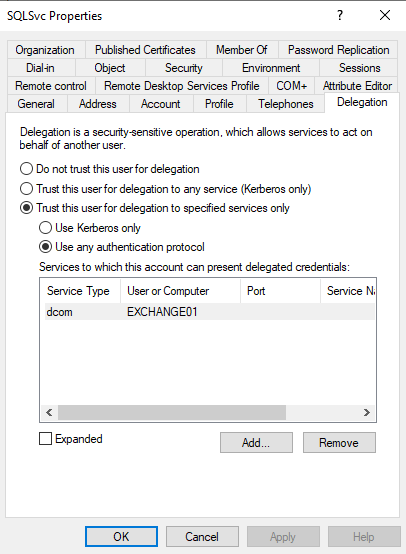 Who is Authorized To Request Service Tickets For Arbitrary Users To Themselfs ?
All principals that have the TRUSTED_TO_AUTH_FOR_DELEGATION UserAccountControl attribute.
→ Per Default no user has this attribute

The following Powershell snippet can be used to find all user’s that have the ‘TRUSTED_TO_AUTH_FOR_DELEGATION’ UserAccountControl attribute:

That means ServiceA wants to impersonate a user connecting to it to ServiceB, to run tasks on ServiceB as this connecting User.

In the “conventional” Constrained Delegation an administrator could configure that one defined user (UserA) is allowed to delegate to a defined service (ServiceB) on a defined host (HostB).
In technical terms that means:
A user account holding the SeEnableDelegationPrivilege can set ms-DS-Allowed-To-Delegate-To account attribute of UserA to be ‘ServiceB\HostB’.

Let’s refer to this “conventional” Constrained based delegation as “Outbound Delegation” for a second.
This makes sense as the granted authorization by the admin points away from the resource (from UserA to ServiceB\HostB).

By introducing Resource Based Constrained Delegation Microsoft wanted the delegation concept to be more flexible and allow a resource owner (that is a User) to decide who is allowed to delegate to him/her.
To facilitate that Microsoft created the new account attribute msDS-AllowedToActOnBehalfOfOtherIdentity.

Instead of an admin (a user holding SeEnableDelegationPrivilege) setting ‘ms-DS-Allowed-To-Delegate-To’ on UserA, any user with write permissions to UserB’s ‘msDS-AllowedToActOnBehalfOfOtherIdentity’ account attribute can set this attribute to a bitmask representing UserA.
→ As UserB has write permissions to his/her own account attributes, UserB can allow UserA to delegate to his/her services without the need of an administrator. 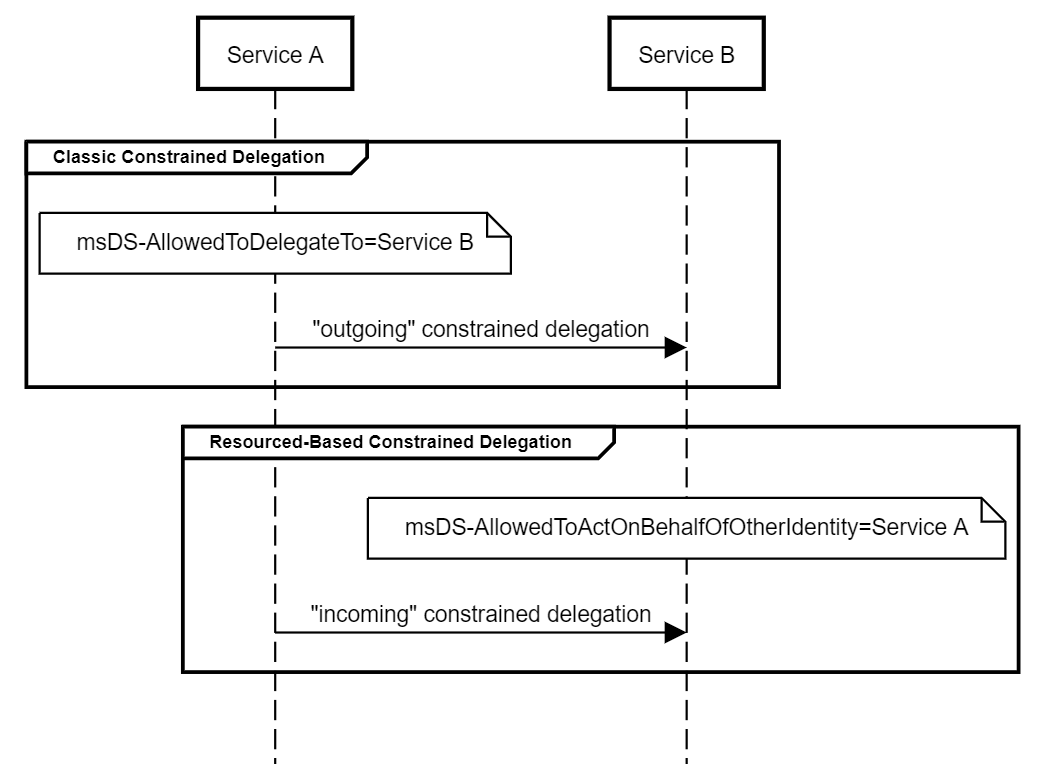 Who is Authorized For Resource Based Constrained Delegation?
Every User that has his/her identify placed in the ‘msDS-AllowedToActOnBehalfOfOtherIdentity’ attribute of the user that is targeted for delegation.

You can look for Resource Based Constrained Delegation settings using the following Powershell snippet:

Who is Authorized To Configure Resource Constrained Delegation?
As Resource Based Constrained Delegation is controlled by a user account attribute, every user that has write access (GenericAll/GenericWrite/WriteDacl) to that attribute of a target User can authorize any user to delegate to the services run by that target User.
→ By default each user has access writes to it’s own ‘msDS-AllowedToActOnBehalfOfOtherIdentity’ attribute
→ Every user can decide on it’s own who can delegate to his/her services

Note: Resource Based Constrained Delegation can not be set via a GUI application, instead Powershell can be used: